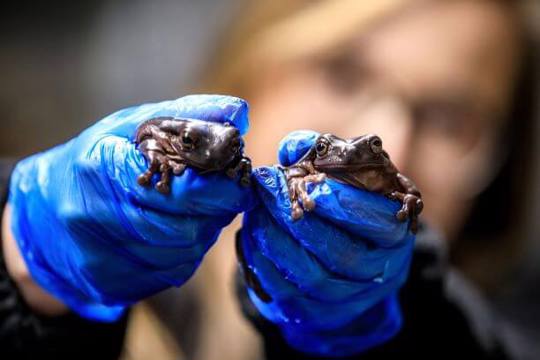 It’s something we all dread – hitting the scales after the Christmas and New Year splurge.

But the animals weren’t complaining when they had their annual weigh-in here at Hobbledown.

Taking to the scales have been our reptiles, exotic and domestic animals. They’ve also all been counted for the animal stocktake, and measured too.

Tipping the scales was Giant Tortoise Max weighing in at 27.8kg, although he’s not near fully grown yet and could grow to at least 45kg eventually.

At the other end of the scale were the Whites Tree Frogs, weighing in at just 57g each.

Zoo Education and Activities Manager Katie Hogan said: “We always complete a weigh in at the start of the new year so we can monitor the animals health and wellbeing for the year ahead.

It’s a bit of a logistical challenge because of all the different breeds involved, but it’s something that a few treats can normally solve!”

Among those having their vital statistics checked have been the meerkats, giant tortoises, lemurs, donkeys and the reptiles.

All data will be added to the Zoological Information Management System, a worldwide comprehensive database of animal health and wellbeing.

Hobbledown currently has over 200 animals at its 50 acre site.