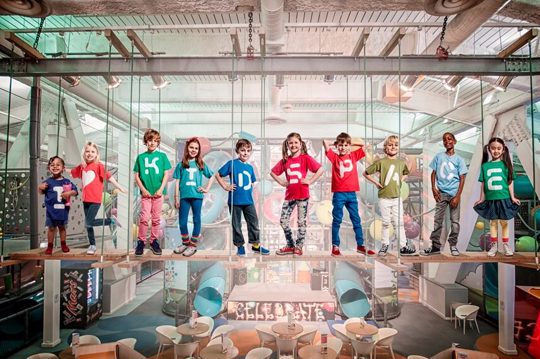 After taking the industry to new heights, our sister company Kidspace Adventures has celebrated reaching its 10th anniversary.

The company, which has two sites in Croydon and Romford, opened the Essex branch in December 2005 at a cost of £1.7m.

It has since welcomed 2.5 million visitors through its doors and hosted 25,000 parties.

Despite a recession Kidspace has continued to invest in the centre throughout the decade (around £1m), continuously updating the main play frame, go-kart track, toddler zone, new kitchen and laser tag.

The concept was created by Richard Farley and Nick de Candole who, upon becoming fathers, realised there was a major shortage of top quality venues to take their children that were both fun for the children but just as importantly well designed for the adults.

Nick and Richard toured Europe and America researching a variety of different operators, both good and bad, for two years before finalising on a concept from which Kidspace Adventures was born.

Richard said: “We’re proud that a number of our employees used to frequent Kidspace when they were young, and now work for us having come full circle!

It’s been a fantastic 10 years in Romford and we thank all of our customers for their support. We certainly look forward to serving the community for another 10!”

In 2016 there will be more modernisation at Kidspace Romford including a new climbing wall and changes to the Toddler Zone and main play frame.